It is fitted with some of the most sophisticated technology in the world but one of Barack Obama's armoured cars has been brought to a halt by a speed bump. 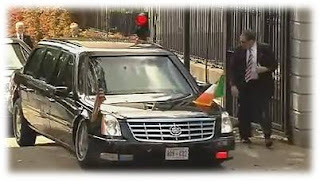 The bomb-proof Cadillac ran into trouble as the presidential cavalcade was leaving the US Embassy in Dublin.
It stopped at the entrance when its bomb-proof undercarriage caught on the slightly raised ground at the gate. The $1m vehicle, protected with bullet-proof glass, a panic button and its own oxygen supply, had to be abandoned. Fortunately it was the back-up car and had been carrying the president’s security detail rather than the Obamas themselves. When the president is travelling in one of the specially-fitted cars, it is officially called Cadillac One - but they have been nicknamed The Beast because of their security specifications.
A SKY NEWS Report

Favorite News of The Day

With so much misery, doom and gloom in the world today, we like to do our very best to bring a smile to the faces of our listeners and readers too. Below you will find world news from both the BBC and SKY... but in this section is the article that made us smile today. Let us know if you enjoyed it too.